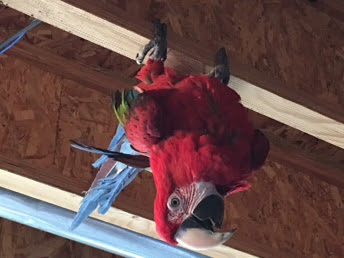 Time and again I see posts on Facebook from people desperate for answers to the problems they are having with companion parrots.  They assume the groups that are specifically set up for people who live with parrots would be the logical place to seek help.  After all, here are hundreds, if not thousands, of people with experience and good knowledge, right?

Sometimes not so much.

If I had a dime for every time I've seen bad advice given in a pet parrot Facebook group...well, we all know how many huge bird rooms I'd have.  One of the most common posts I see are pleas for help with a biting parrot.  Also common are requests for advice about a parrot on a shoulder who has bitten someone's face.  There seems to be an easy remedy for this - don't put the parrot on your shoulder.  However, the responses most often given concern something called "Height Dominance."  Height Dominance is the idea that when a parrot is perched higher than eye level, it becomes dominant in its own mind or has a sense of superiority. This concept should have gone obsolete along with big hair and the Berlin Wall, but some of the places where you can find this archaic information are mind-boggling. Even a few veterinary websites proclaim the dangers of allowing a parrot to perch above you, where it will immediately feel like the dictator of a third world country. 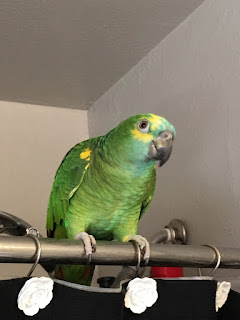 Admittedly, I don't breed parrots, I don't tour the world training parrots and I haven't spent years in other countries studying parrots in the wild. However, I read literally everything I can get my hands on - particularly about wild parrots, I attend conferences and workshops, I have long discussions with aviculturists I watch videos, and I work to find new homes for birds.   I have lived with parrots for over twenty years, both my own and fosters.   I've watched them closely, examined who motivates them, tried to understand how they see the world as a bird. I have a house full of my own reprobates who have various reasons for not doing what I want them to do...none of which have anything to do with a need for dominance.

A few friends of mine who breed parrots have noted that with a nesting pair, the male will sit higher than the female.  There are many reasons a parrot may want to perch higher than another parrot.  A male sitting higher than a nesting female doesn't speak of dominance to me, it speaks of protection.  Height provides a better view of things, a better opportunity to jump on a predator or rival.  We all know of males who kill mates.  Conversely, we also know females can, and sometimes do, attack their male partners. I completely believe a male may sit higher, but I don't think it's a show of dominance over a female.

The consensus from biologists, ornithologists, and published aviculturists who have studied parrots in the wild seems contrary to the height for dominance theory.  Parrots do have sentinels, particularly Pionus parrots, who will pick a high branch and cycle flock members through to keep watch. Parrots also squabble in the wild, but I have never read anywhere that it's over a desire to be dominant by having the highest branch.  What purpose would that even serve?  Dominance in mammals serves a purpose - first in line for a kill, making decisions for the pack, pick of the females.  For parrots, there's always another high branch, or another piece of fruit on another tree.  Dominance doesn't seem to accomplish anything here.  We know with mates there's a complicated mating ritual that involves a lot of displaying and, for parrots, mutual attraction as in most instances they will stay together for life.  I don't think any female parrot is going to pick Brad because he's a good fighter over Percival who tickles her fancy for who knows what reason.  Parrots do remind me of humans a little in this regard.  They fall in love for reasons that make no sense to an outsider. 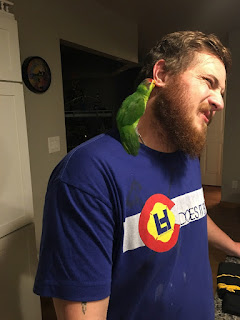 For people who breed parrots this is a moot point - if a pair seems happy and they produce offspring, it really doesn't matter why they are perching higher.

Here's why that theory is dangerous for companion parrot owners.  Parrots are incredibly intelligent, sensitive beings.  This is why we are so drawn to them. If a person is convinced her parrot is trying to be "dominant" over her, the natural reason is to "teach" the parrot that it is not. In turn, the owner is well on her way to destroying trust and ruining a relationship with her bird.  One post I read in a Facebook group (that is supposedly geared toward education) was from a person seeking help for a "biting" parrot, a parrot who in particular bit faces while perched on a shoulder. The overwhelming response was about height dominance.  No! No! No! This is not about dominance.  This is about not being able to read body language in a bird who is either highly excited, or stressed, or any number of things.  It was also mentioned that the bird won't come off the top of his cage, or will jump on the owner.  I have a number of questions here.  Does the parrot get put back in his cage every time he steps up off his cage? Is he doing something up there that is more rewarding than stepping up to do something else?  Does he jump on his owner because he doesn't want her near his cage? Is he jumping because he thinks she will force him to do something he doesn't want to do? A wing trim may settle him down, but only because he doesn't have the option of flying onto a head anymore.  I agree it may make it easier to work on training, but it doesn't teach him anything about who is "dominant."I don't believe that this means anything in a parrot's world.  In the wild, they are just trying to survive, to stay alive one more day.  Sentinels make sense.  Dominant leaders do not.  All members must be vigilant and in this way the flock provides protection for its members.

Birds LIKE high places, such as trees, telephone wires, the top of your kitchen cabinets.  It's safe up high; you can see cool stuff when you're up high.  If your parrot is above you and he lunges at you or tries to bite you when you jab your hand into his belly, it is because you are trying to force him to come down and he'd rather stay right where he is.  He is not trying to show you he's dominant.  He isn't sitting up there thinking, "Well, Debbie, it's pretty clear from my position of height who is actually in charge here.  Maybe if I was below your shoulder, I'd step up.  But I'm not.  So, off with you, inerior being.  I have position-of-power things to do." Oh, and that whole push-your-hand-into-a-parrot's belly repeatedly, while saying, "Step up! STEP up!"? Yeah, they hate that.

I live with a large flock of parrots and I foster other birds throughout the year.  I've spent time with big, male Amazons who lunged and tried to jump on me when I got within a few feet of them.  I've had birds so frightened they slammed into their cage bars if I even walked into the room.  I've learned some important lessons, the most important being to never label a bird.  A parrot is not mean, or a hater, or (my favorite line) unadoptable. Take your time, go slowly, watch and study, and do not force a parrot to do something unless it is absolutely necessary.  They aren't trying to dominate you, they are so much more complicated than that.  If you have the patience to study them, you'll figure it out. If you want quick and easy answers, parrots are not for you.